for 2-channel audio
by Hildegard Westerkamp
Commissioned by the Association of Canadian Women Composers (ACWC)
Premiere (short version): January 27, 2002, Then, Now and Beyond, A Festival of Music by Women, Ottawa, Ontario, Canada 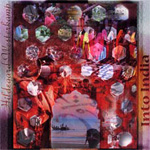 What do we consider to be sacred in our lives and how do we attend to it? This question, my travels in India and my long-standing environmental concerns formed the impetus for this composition and are somehow brought together here. The sacred is deeply meaningful in Indian culture and, on a daily basis, people visit temples or other holy places of the many different religions. The piece is working on two levels: on the one hand it tries to grapple with the almost chaotic multitude of religions in this country and on the other hand it wants to create a place of inner stillness, a sacred place of energy, attention and creativity, of deeper listening.

Regular religious practice is very much a part of people's lives in India and exists on a much wider scale than in North America and Europe. Consequently, the sounds of religion are also abundantly present in the Indian soundscape - from their most prominent and raucous form of distorted loudspeakers broadcasting religious chants into the environment for hours at a time, to their more intimate, quiet form of a group of people, for example, participating in a dawn ritual in a local park. Attending to Sacred Matters is based on the sounds of the many religious and spiritual practices that I encountered and recorded in India - such as the chanting from the Sikh Golden Temple in Amritsar, bells and ritual sounds from various Hindu temples, sounds from an Ashram in Rishikesh and the voice of Swami Brahmananda, Muezzins calling for prayer from various mosques, chanting at dusk on the Ganges in Rishikesh, voices of people naming Hindu Gods and Goddesses, bells from a Jain temple, the chanting of OM, and so on. In addition, there are the sounds of water and the voice of environmental activist Vandana Shiva.

People in India often speak proudly about the fact that many religions can co-exist peacefully in their country. And then deep disappointment is expressed when one violent incident, such as the destruction of the mosque in Ayodhya in 1992 by politically extreme Hindus, causes once again the eruption of hate between religious groups. When I started to work on this piece, it was precisely with the idea of celebrating, through the "language" of sound, the peaceful co-existence of different religious and spiritual belief systems. Now, in the face of the many voices of hate, violence, aggression, war and sensational journalism, I have felt an urgency to create a listening experience, a "tone", a place of listening, that allows the more hidden voices in us of peace and human compassion to emerge and to speak out with conviction.

A shorter version of Attending to Sacred Matters was commissioned by the Association of Canadian Women Composers with the assistance of the Canada Council.

Attending to Sacred Matters is dedicated to my friend Veena Sharma who took me to many holy places in India, including the Ganges in Rishikesh.

A shorter version of Attending to Sacred Matters was commissioned by the Association of Canadian Women Composers with the assistance of the Canada Council.

Attending to Sacred Matters is dedicated to my friend Veena Sharma who took me to many holy places in India, including the Ganges in Rishikesh.